(As prepared for delivery)

I am pleased to be here for the signing of the agreement implementing the Foreign Account Tax Compliance Act (FATCA). This is another milestone for a relationship that has endured for many, many decades.

I would like to thank in particular Finance Minister Capicchioni and Foreign Minister Valentini for their warm welcome; and thank you to all of you for your longstanding friendship with the United States.

The ties that bind our countries are based on long held principles and beliefs.  President Abraham Lincoln witnessed that first-hand during one of the United States’ most challenging periods.  In 1861, the Captains Regent of San Marino, the oldest constitutional republic in the world, sent a letter to President Lincoln expressing their support for Lincoln and his ongoing struggle to keep the country united.

The San Marino leadership held Lincoln in such high esteem that the letter also granted Lincoln honorary citizenship.  Lincoln’s response, also signed by Secretary of State William Henry Seward, accepted the “honor of citizenship” and noted that San Marino “has by its experience demonstrated the truth, so full of encouragement to the friends of Humanity, that Government founded on Republican principles is capable of being so administered as to be secure and enduring.”

In a similar vein of partnership, of cooperation, and of mutual agreement for respect of the law, we welcome the Republic of San Marino’s commitment to intensifying our cooperation to improve international tax compliance.

Today’s signing marks a significant step forward in our countries’ efforts to work collaboratively to combat offshore tax evasion – an objective that mutually benefits both San Marino and the United States.

Access to information is critically important to the full and fair enforcement of domestic tax laws.  Information exchange is a centerpiece of international efforts to tackle cross-border tax avoidance.  As such, we have been a leader in the development of new international standards for greater transparency through the coordinated exchange of tax information.

We must work together to detect, deter, and discourage offshore tax abuses through increased transparency and enhanced reporting.  If we do so, we can help to build a stronger, more stable, and more accountable global financial system.

FATCA is yet one further example of the deep and substantial links that positively bind the Republic of San Marino and the United States.

We have been negotiating to sign this FATCA agreement for more than two years.  Now that it is signed, we should look toward the future and find new ways to work together to support international human rights, encourage innovation and investment, and safeguard financial stability in both of our countries.

Yesterday I met with Minister of Trade and Industry Arzilli.  I was excited to hear about all of the new initiatives San Marino is taking to broaden its economic base:  from successful tenders to support start-up companies, to renovating and expanding the airport in Rimini, to pursuing closer ties with the United States Transportation Safety Agency on flight regulation.  These activities exemplify where we should be looking: to the future, to diversification, and to new ways of collaboration.

In this morning’s meeting with Foreign Minister Valentini, we discussed the need for our countries to continue working together to promote the principles of democracy and human rights so dear to both of us, and to put those principles into action.  I am proud to say that the United States and the Republic of San Marino have been doing this, and we will continue to do so.

The Republic of San Marino and the United States have deep ties.  We have deepened them further with the signing of this agreement.  Let us continue to embrace those cherished principles that have guided our relationship for so long.  Let us deepen our ties even further by continuing to tackle together some of the most pressing challenges facing humanity.  I ask you to continue working with us, the United States, in helping to shape a better world for the generations that will follow.  Thank you. 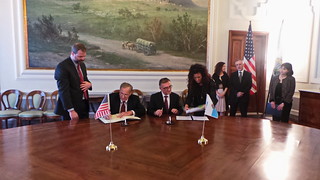